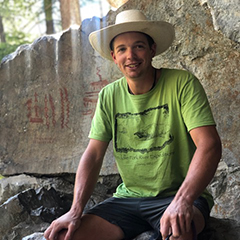 Born in Chicago, IL, Andrew moved to the rolling hills of Idaho at the age of 10 and never looked back. Quickly, a deep appreciation for the state’s vast wilderness and unparalleled recreation opportunities took hold. With all of his spare time being poured into skiing and rock climbing Andrew never considered becoming a raft guide until he was spontaneously offered a job to work on a small stretch of white water just outside of Stanley, ID. Since then, Andrew has gotten to show thousands of people a small section of one of Idaho’s beautiful and magical rivers. This will be Andrew’s sixth season guiding in Idaho but his first as a member of the MFRE team.

In addition, Andrew has just finished his undergraduate degree at Quest University in Squamish, BC where he focused his studies on music and acoustics. Andrew’s academic interest in sound is paired with a deep passion for playing the guitar and listening to just about any type of music.  MFRE and you are lucky to have him on the team!