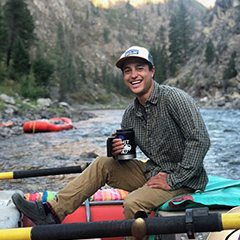 Beppe was born and raised in Sacramento, CA, where he spent his summers exploring the rivers of California and Oregon with his family. When he was 12 years old his father let him take the oars, and he never gave them back. He started guiding commercially during his summers in high school, and moved out to Idaho to join fellow MFRE guide Andrew McKean on the day stretch of the Main Salmon in the summer of 2017.  His first season with MFRE was 2019.

Beppe attended Quest University in British Columbia, where he studied mathematics and environmental engineering. However, it should be noted that he focused his studies in these areas because his favorite subject, recess, was not an available major. Beppe is passionate about having fun, learning new things, and making other people feel comfortable exploring their boundaries. His up-beat attitude, hard work ethic and sense of ease with connecting to other people make him a great fit for MFRE.  He is also a super solid class V hard shell kayaker.