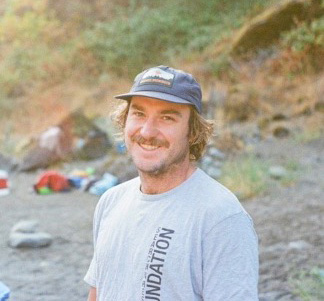 Elias hales from Sitka, Alaska just a stones throw away from the Pacific Ocean and although he only spent his first six years in Sitka, his time there was formative for cultivating a love for water and the outdoors. Summer nights were spent fishing off the docks of Sitka Harbor, and on weekends, his family would load up their skiff with gear and set out to find an uninhabited island in the Alexander Archipelago to camp for the weekend.

In 2000, Elias moved to Ashland, Oregon where he would spend the rest of his adolescence. He was introduced to snowboarding as a family weekend activity and fell in love with the mountains. Throughout high school Elias competed in snowboarding and felt at home in a community built around a love for being in the mountains.

Elias went to Whitman Collegeand worked on the Deschutes River for 5 summers running Multi day trips.
After a childhood friend invited him on a private trip down the Salmon in 2021, Elias fell in live with Stanley and the surrounding area, including the river that runs through it. The summer of 2022 will be Elias’ first season as a guide with MFRE. He comes highly recommended and we are sure you will love his good natured demeanor and love of rivers.